The Golden Triangle Tour II provides the tourists one of the best ways of getting acquainted with the rich heritage of the country of India. inseparable part of their itineraries around India program. The Taj Mahal in Agra, the Qutab Minar of Delhi, and the Amber Fort in Jaipur would be covered during the Golden Triangle Tour in India. Delhi, Agra and Jaipur would be the tourist cities in India covered during this tour. The details of the travel itinerary are provided below.

The 1st Day of the Golden Triangle Tour II would begin with your arrival to the city of Delhi in India. welcome you to the capital city of the country. We would also help you to get to your hotel in Delhi. You can check into the hotel and rest for some time. During the course of Indian history the city of Delhi was destroyed and rebuilt on numerous occasions. Some of the historic places which you would be visiting during the late morning include tourist attractions like the Qutab Minar, the Iron Pillar, the India Gate, the Rashtrapati Bhawan and the Parliament House. The Qutab Minar was constructed by Qutabuddin Aibak during the 12th or 13th century. The India Gate was constructed in the memory of the Indian soldiers who died during the World War II. During the afternoon, TSI Holidays would take you to the Red Fort. The Red Fort is located along the banks of the Yamuna River. The red sandstone structure was built by Shah Jahan. At the Red Fort the places of interest include the Diwan-i-Am, the Diwan-i-Khas, the Hall of Public Audience, the Pearl Mosque, etc. The Pearl Mosque was constructed under the orders of Aurungzeb. The other places which you would be visiting include the Jama Masjid and the Chandni Chowk. The Chandni Chowk is one of the most popular bazaars of Delhi and the Jama Masjid is one of the largest mosques located in the country. The evening program includes dinner and return to the hotel.

After having your lunch at the hotel you would be leaving for Jaipur. It would take you a 6 hour journey by private car reach the city from Delhi. check into your hotel for an overnight stay. The moment you enter the city of Jaipur you would realize why it is known as the Pink City. The city of Jaipur was founded by Sawai Raja Jai Singh II during the 18th century.

In the morning, you would be taken to the Amber Fort and Palace. You could enjoy an elephant ride at that place. Till the year 1728, the Amber Fort was the capital of Jaipur, which was then one of the princely states of India. The Sheesh Mahal which is located within the Amber Fort is a marvelous architectural structure. You could also visit the Hawa Mahal, popularly known as the Palace of Winds, during your Golden Triangle Tour. The City Place would be visited during the afternoon. Constructed by Sawai Raja Jai Singh II in the year 1734, you would be visiting Galleries of Textile, Armory, Deewan E Khas & Royal Dancing courtyard. You would also be taken to Jantar Mantar which is one of the important astronomical observatories located in the country. In the evening you return to your hotel.

During the morning you would be traveling to the city of Agra via Fatehpur Sikri. The city of Fatehpur Sikri was built by the great Mughal Emperor Akbar. From the period between 1570 and 1586, Fatehpur Sikri was the capital of the Mughal Empire. The historical monuments in Fatehpur Sikri which you would be visiting include Ankh Michauli, Diwan I Khas, Astrologer’s Seat, Panch Mahal, Girl’s School, Turkish Sultana, Anup Talao, Khwabgah and the Diwan I Am. When Gujarat came under Akbar’s rule, to celebrate the occasion, the Buland Darwaza was built. In the evening you would be taken to view the Taj Mahal. The Taj Mahal is one of the Seven Wonders of the World. It was built by Shah Jahan in the memory of his beloved wife Mumtaz Mahal. The Taj Mahal looks very majestic and beautiful during nighttime. overnight stay in Agra.

With early morning vist Taj Mahal in sun rise,later back to your hotel for breakfast. After break fast would reach the Agra Fort. Have lunch in agra.later drive to Delhi for your onward joueney back home. 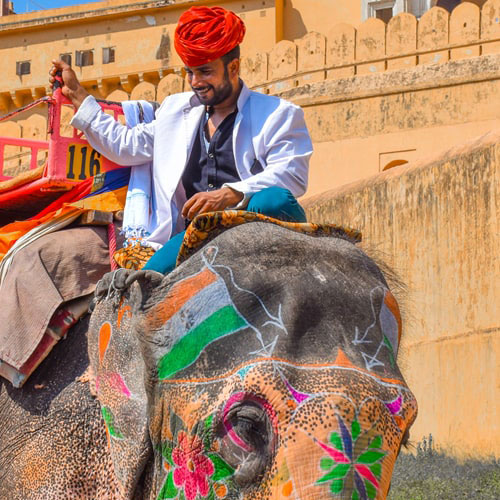